Polystyrene is one of the most special chemical chains in the petrochemical industry. This chain is one of the longest carbon series in chemicals and belongs to the phenyl group. Polystyrene contains most of the carbon and hydrogen chemical elements and is known by the formula n (C8H8).

Of course, the special properties of polystyrene lead to many disadvantages, and one of the most important disadvantages of this plastic is that it is too dry and brittle, so much so that it is also called crystal. On the other hand, the low resistance of this polymer against UV rays and its excessive flammability are other disadvantages of this special plastic. Of course, the complete destruction of this plastic takes place at a very high temperature, but this melting point (300 degrees) takes place in one step, and this is its biggest drawback.

The first and most important way to use polystyrene is disposable plastic containers. These dishes, which play a very important role in everyday life and industry today, are used because of their transparency and density. After transparency, the high strength of this plastic causes it to be used in the manufacture of most sanitary ware, children’s toys, sports equipment and even in the automotive industry.

In another category, polystyrene is another type, called resistant polystyrene. This type of polymer, called co-polymer, is a more durable and modified version, which has a direct place in home appliances. Co-polymer is also known as Hypec in Iran.

As the impact resistance of this plastic has increased, more and more applications have been defined for it and they are used in rubber, TV manufacturing, home appliances, trays and shelves inside refrigerators, floors, etc.

Apart from the durable type of this plastic, EPS or Ionolite is called foamed and softened polystyrene. When we add some plastic granules to ordinary polystyrene, it grows bigger and bigger exponentially, and finally it becomes doughy and soft

Expanded polystyrene is a white polymer with fire retardant properties to which a foam is added. This type of polystyrene is known in the Iranian market as Ionolite. 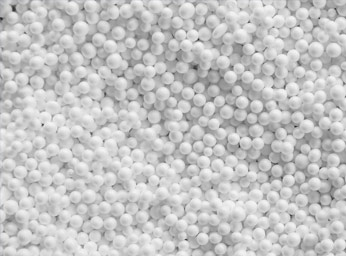 Ionolite’s excellent resistance to water, moisture and fire makes it one of the most important components of the construction industry. Today, all buildings have been converted into anti-earthquake structures by using soft polystyrene, so that in case of fire, earthquake, etc., they do not suffer from side effects such as increased fire or additional debris.

Some types of polystyrene grades include: