Today, sodium hydroxide is used as a widely used mineral in every industry.

This substance, whose chemical formula is NaOH, was used in the past as a substance for making soap.

But today it is used in every industry, from the production of cosmetics to the oil, gas and petrochemical industries.

This product is widely used as an alkaline substance in various industries. And it is both stronger and faster than other reactionaries.

It is easy to maintain and is available in both solid and liquid forms. For this reason, it is used in various industries.

The applications of caustic soda flakes are very wide in the industry, different industries use this material with different approaches. Some of these industries are: 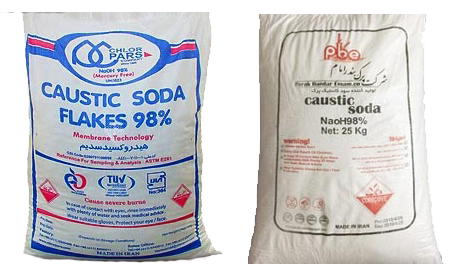 Sodium hydroxide in the food industry:

Sodium hydroxide is widely used in canning as a peeling agent for potatoes, tomatoes and other fruits.

It is also used in sweetening and olive processing. Other uses of flakes include preventing the growth of bacteria and mold in the production and packaging of food.

Profit of flakes in metals and plating:

This material is used for electroplating with copper cyanide as an electrolyte. Also used in metal, zinc, aluminum, galvanized, glass.

Caustic soda is used as a substance to produce sodium phenolate for the production of aspirin and disinfectants such as alcohol.

Sodium hydroxide in the production of cosmetics:

To maintain and store caustic soda, you should consider the following:

Peeling soda should not be stored with acidic substances as well as nitroparaffin, nitro-aromatics and halogenated organic compounds.

3- Avoid the presence of water with packaged soda packaging.

4- Always make sure that the sack bags are healthy.

The export profit offered by Avidan Chemicals Trading Company is offered with 99.5% purity and in 25 kg packages with guaranteed purity and quality.